“We, verily, have made music as a ladder for your souls…” –Abdu’l-Baha

It reminds me of certain quotes:

“The art of music is divine and effective. It is the food of the soul and spirit. Through the power and charm of music the spirit of man is uplifted. It has wonderful sway and effect in the hearts of children, for their hearts are pure, and melodies have great influence in them. The latent talents with which the hearts of these children are endowed will find expression through the medium of music. Therefore, you must exert yourselves to make them proficient; teach them to sing with excellence and effect. It is incumbent upon each child to know something of music, for without knowledge of this art the melodies of instrument and voice cannot be rightly enjoyed. Likewise, it is necessary that the schools teach it in order that the souls and hearts of the pupils may become vivified and exhilarated and their lives be brightened with enjoyment.”

“Thus should it be among the children of men! The diversity in the human family should be the cause of love and harmony, as it is in music where many different notes blend together in the making of a perfect chord. If you meet those of different race and colour from yourself, do not mistrust them and withdraw yourself into your shell of conventionality, but rather be glad and show them kindness. Think of them as different coloured roses growing in the beautiful garden of humanity, and rejoice to be among them.”

Journalist Roxana Saberi may be free today, but the 7 Iranian Baha’i leaders are still in jail

Although this blog is happy that journalist Roxana Saberi has been freed, it has some sobering news to remind you:

Today, May 14th, marks the one-year anniversary of the imprisonment of seven Baha’i leaders in Iran, who have spent a year in jail without formal charges or access to their lawyer, Shirin Ebadi.  The families of the prisoners were recently informed that a new accusation has been lodged against them by the Iranian government, the charge of “spreading corruption on earth,” which carries the threat of death under Iran’s penal code.

Local Bahá’ís are also writing to their members of Congress, and urging other to do the same, to gather additional cosponsors for two resolutions, H.Res 175 and S.Res.71, currently before the U.S. House of Representatives and the Senate respectively, which call for the release of the Iranian Baha’i leaders and other Bahá’í prisoners

Bani Dugal, the principal representative of the Baha’i International Community to the United Nations, said on May 12 that “despite their obvious innocence and the call by many for their immediate release, these seven men and women have been in legal limbo for a year now, against all international human rights standards.”

Ms. Dugal also noted that Iranian President Mahmoud Ahmadinejad has frequently emphasized the importance of “justice and human dignity” and “the establishment of a just world system,” such as when he addressed the UN Durban Review Conference in Geneva last month.

“How can the calls of the Iranian leadership for justice in the international sphere be taken seriously if they do not grant justice to their own citizens? In Iran, by all accounts universally agreed upon human rights are routinely ignored, not only for Baha’is but also for women, journalists, and others who only seek dignity and justice,” she said.

The seven are Mrs. Fariba Kamalabadi, Mr. Jamaloddin Khanjani, Mr. Afif Naeimi, Mr. Saeid Rezaie, Mrs. Mahvash Sabet, Mr. Behrouz Tavakkoli, and Mr. Vahid Tizfahm. All but one of the group were arrested on May 14, 2008 at their homes in Tehran. Mrs. Sabet was arrested on March 5, 2008 while in Mashhad. Read more about them.

The prosecution of the leaders is just one step in a 30-year-long systematic campaign orchestrated by the government to eliminate the Baha’i community as a viable entity in Iran, the birthplace of the Baha’i Faith.

The Baha’i Faith is the youngest of the world’s independent monotheistic religions and one of the fastest-growing, with a significant presence throughout the United States. Baha’is view the world’s major religions as part of a single, progressive process through which God reveals His will to humanity. Major Baha’i tenets include the oneness of humanity, equality of men and women, eradication of prejudice, harmony of science and religion, universal education and world peace.

Updates and background on the situation of the Baha’is in Iran are posted at http://iran.bahai.us.  To learn more about the Baha’i Faith in America, check www.bahai.us and the Religion Newswriters Association Source Guide on the Baha’i Faith at http://www.religionlink.com/tip_090211.php

Posted in human rights, Media, Persecution of the Baha'is in Iran, Yaran 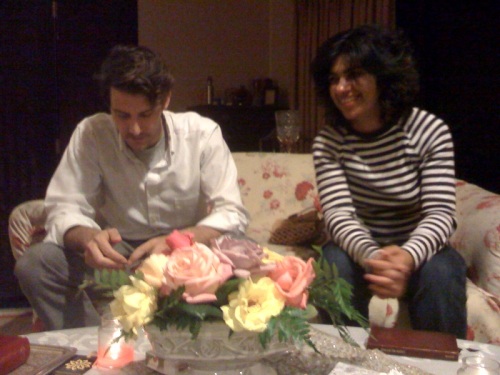 What is a devotional gathering? Simply put, it’s a prayer meeting. Friends gathering at another friend’s home. The young adults (in their 20’s & 30’s) of Pasadena get together to say prayers on a Sunday night, to start their week all right.

The power of prayer is amazing. It’s what renews you when you have no energy or strength. It also allows you to accomplish great things when you put your affairs in God’s hands.

Here is an example of a Baha’i prayer, revealed by Abdu’l-Baha:

“Make firm our steps, O Lord, in Thy path and strengthen Thou our hearts in Thine obedience. Turn our faces toward the beauty of Thy oneness, and gladden our bosoms with the signs of Thy divine unity. Adorn our bodies with the robe of Thy bounty, and remove from our eyes the veil of sinfulness, and give us the chalice of Thy grace; that the essence of all beings may sing Thy praise before the vision of Thy grandeur. Reveal then Thyself, O Lord, by Thy merciful utterance and the mystery of Thy divine being, that the holy ecstasy of prayer may fill our souls—a prayer that shall rise above words and letters and transcend the murmur of syllables and sounds—that all things may be merged into nothingness before the revelation of Thy splendor.

Lord! These are servants that have remained fast and firm in Thy Covenant and Thy Testament, that have held fast unto the cord of constancy in Thy Cause and clung unto the hem of the robe of Thy grandeur. Assist them, O Lord, with Thy grace, confirm them with Thy power and strengthen their loins in obedience to Thee.

Thou art the Pardoner, the Gracious.”

Dorothea’s award from the City of Pasadena 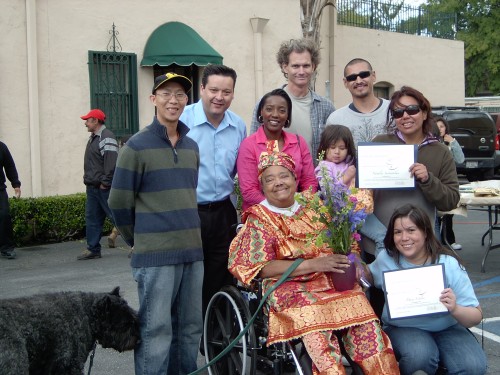 On March 22nd, Pasadena Baha’i Dorothea Bradley (holding flowers in photo) was honored by the City of Pasadena for “her unwavering commitment and unselfish dedication to her neighbors and greater community. Her efforts have helped build stronger neighborhoods which are the very foundation of our great City and the support system for our families.” Indeed.

Having worked with Dorothea on her annual Posada, National Night Out, and other projects, she is a dedicated community organizer, visionary, and true friend. 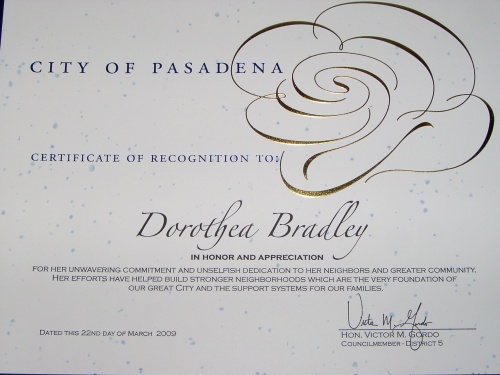 The Bahá’í community of Pasadena will get together on Saturday, May 2nd to celebrate the annual Festival of Ridván. The event is open to the general public at the Western Justice Center, 55 S. Grand Ave.

The word “Ridván” means “Paradise.” For twelve days from April 21 to May 2, 1863, Bahá’u’lláh, the Prophet-Founder of the Bahá’í Faith, resided in a garden of Baghdad that he dubbed “the Garden of Ridván”. There Bahá’u’lláh publicly proclaimed his mission as God’s messenger for this age. At the time of his proclamation, Bahá’u’lláh was an exile in Baghdad, banished from his native Persia because of his teachings.

The Festival of Ridván is celebrated by Bahá’ís throughout the world with great joy and fellowship. Bahá’u’lláh wrote of the garden, “This is the Paradise, the rustling of whose leaves proclaims: ‘O ye that inhabit the heavens and the earth! There hath appeared what hath never previously appeared. He Who, from everlasting, had concealed His face from the sight of creation is now come’.”

In his writings, Bahá’u’lláh promulgates the equality of men and women, the essential harmony of science and religion, the independent investigation of truth, economic justice based upon spiritual principles, the urgent need for the elimination of all forms of prejudice, universal compulsory education, and international auxiliary language, and a world government for the maintenance of a lasting peace.

Bahá’u’lláh’s exile to Baghdad was the first of several banishments that occurred until his death in 1892. Dismayed by their inability to curb Bahá’u’lláh’s continuing influence and growing Faith, Persian religious and government leaders convinced the officials of the Ottoman Empire to banish Bahá’u’lláh to Adrianople, Constantinople, and finally, to the horrendous prison city of Akka in the Holy Land. Bahá’u’lláh suffered forty years of torture, imprisonment and exile.

The World Center of the Bahá’í Faith is on Mount Carmel in Haifa, Israel.

HAIFA, Israel — A new Web site with information for visiting the Baha’i shrines and gardens in Haifa and Acre was introduced today by the Baha’i International Community.

The Web site gives details about tours, hours, and the gardens themselves, as well as information about visiting the Shrine of Baha’u’llah in Acre and the Shrine of the Bab in Haifa. The shrines are the resting places of the founders of the Baha’i Faith.

The site launched in both English and Hebrew and an Arabic version is forthcoming.