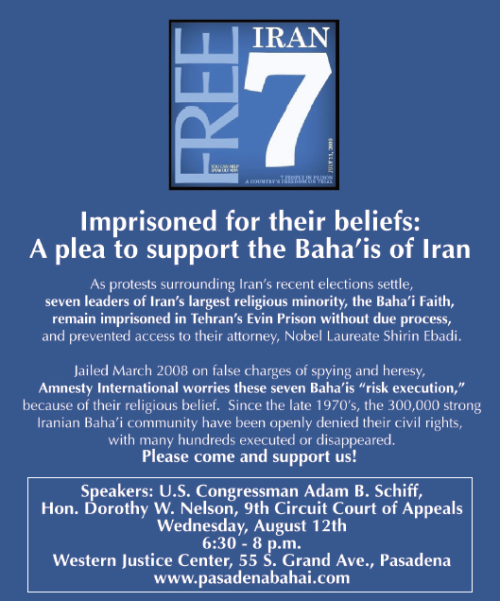 We’re writing you because seven of our dearly loved Baha’i brothers and sisters in Iran are in grave danger, and possibly face execution. They have been held in Tehran’s Evin prison for over a year with no access to their lawyer, Nobel Laureate Shirin Ebadi. Their crime: being Baha’is. 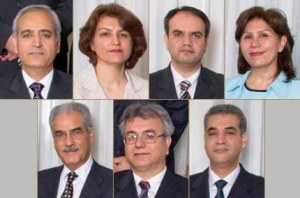 The US State Department, the UK Foreign Office Minister, Amnesty International and others have roundly condemned the imprisonment and trial of the Baha’is: http://iran.bahai.us.

Support from our Congresspersons

On February 13th, 2009, a bill was introduced in Congress, H. Res. 175, “Condemning the Government of Iran for its state-sponsored persecution of its Bahá’í minority and its continued violation of the International Covenants on Human Rights.” Our Congressman, Adam Schiff, supports it. S. Res. 71, a concurrent resolution to H. Res. 175 regarding the persecution of the Baha’is in Iran, was introduced into the U.S. Senate on March 9, 2009, receiving support from our Senators Barbara Boxer and Dianne Feinstein.

Why should you care?

The Baha’i Faith is a peaceful religion that seeks to promote the unity of mankind. Our principles are in alignment with American values: http://www.bahai.org.

We may be small in number (about 6MM worldwide), but we are spread out across almost every country in the world and are trying to be of service to humanity. Baha’is have been in Pasadena since the early 20th century.

We need your help

You were probably unaware our situation until now, but we need advocates beyond the Baha’i Community:

Your friends and neighbors,

The Baha’is of Pasadena, California

Back in the Saddle again (almost)…

I know it’s been a long time since I last wrote. But I had to take a break.

Summer vacation from the blog is a much needed thing.  Writing can be draining, especially if one has a demanding full-time job.

No vacation from said demanding job, though.  Too many vacations in ’08.   But I napped when I could.

According to my doctor, I should stay in bed one day a month.  I asked doc if I was ill.  Doc said, “No, but you crazy advertising folks are way too overstimulated with your computers, iPhones, etc. that it’s actually more exhausting that physical labor.  You need to disconnect.”

I couldn’t stop thinking about the events in Iran however.  Which, of course, drew me back to the blog.

Untanned, rested, and ready (to write)!