Speaking up for the Baha’is at Sinai Temple, Los Angeles 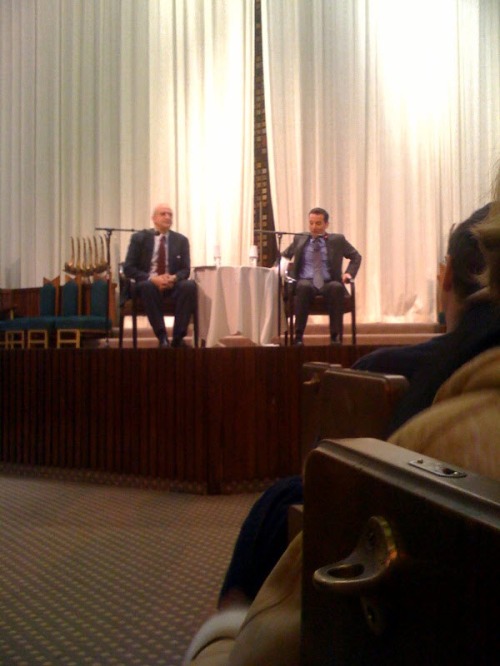 Roger Cohen of the NY Times and Rabbi Wolpe of Sinai Temple, LA

Thanks to a reader in Israel, I found out that Roger Cohen, author of the article “Iran, the Jews, and Germany” mentioned in a previous blog posting, would be in Los Angeles on Thursday, March 12th at Sinai Temple for “…a crucial dialogue with the Iranian Jewish community.” The Temple was about 1/3 full, with probably about 200 people there, eagerly awaiting to hear what Cohen had to say.

Mr. Cohen started the evening with an opening statement touching upon the article, “What Iran’s Jews Say” and expressed his desire to defend our right to disagree with him. In the opening statement, he also shared his story of becoming an naturalized American citizen and the first written sentence of the naturalization test was: “I want to be good American.”

I believe that Cohen’s intention is good–to foster greater understanding and unity between Iran and the US. This is desperately needed right now. He also mentioned that is far too easy to demonize a country on tragic misunderstanding and error. That is true as well. The Iranian people have been unfairly portrayed in the US media. He actuallly went to Iran to meet the people and the government–so his reporting was based on first-hand experience of what’s going on in Iran today.

The only issue I have with his columns on Iran is that they miss out on one of the biggest (unreported) stories in Iran: the persecution of the Baha’is. The Baha’is are the largest religious minority in Iran, 300,000 strong. The Baha’is of Iran cannot practice their Faith publicly, nor attend university unless they renounce their Faith, have seen their cemeteries razed, their property confiscated, and have been killed with impunity since the inception of the Faith in the 19th century. None of these details were mentioned in the articles. Mr. Cohen did acknowledge that in his trip to Iran, he did not meet or speak with any Baha’i. 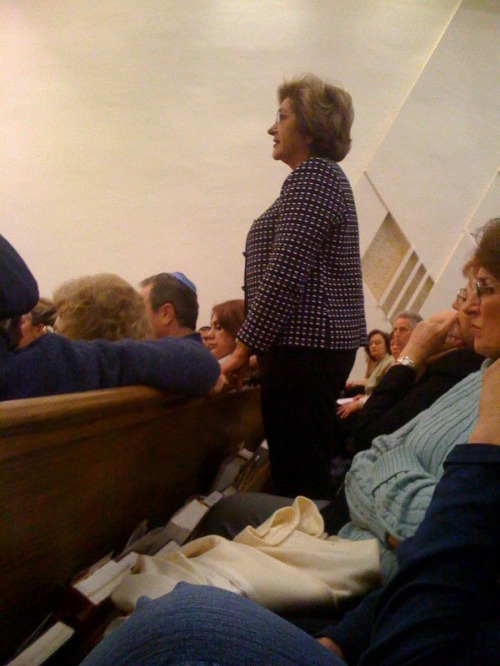 Dr. Mahmoudi speaks in support of the Baha'is of Iran

After Mr. Cohen spoke, Rabbi Wolpe asked him several hard-hitting, but generally fair questions. Rabbi Wolpe then opened it up to the audience to ask Mr. Cohen his questions. There was actually another Baha’i in the audience, Dr. Mahmoudi from LA, who made a comment about the suffering of the Baha’is in Iran before my question. I did not know her before that evening. It took a while to be able to ask my question. My arm felt like it was going to fall off waiting to be called! Finally, at the last minute, Mr. Cohen was asked to pick the final questions of the night:

I asked him about the Baha’is, acknowledging him for mentioning the Baha’is, even if in passing in his article, and also pointing out that the ad-hoc leaders of the Faith are currently in prison (see previous articles in this blog), awaiting trial, with no access to their lawyer, Nobel Laureate Shirin Ebadi, with the possibility of the death penalty. I asked him in the spirit of fairness, in his stated goal to show a more complete image of Iran in the US, “could you please write an article about the situation of the Baha’is in Iran?”

The crowd clapped at this suggestion and several people called out to him to see if he would answer my question. He said that hasn’t written about the Baha’is in Iran and was unsure if he would write about them in the future. Several members of the crowd approached me afterwards thanking me for asking Cohen the question.

Thank goodness the Jewish Journal recorded the entire program, inclusive of all questions. Click here to watch it. Running time is about 1 hr 30 minutes. I ask my question at 1 hr 22 minutes. I am not seen, only a disembodied voice.

I also left a comment on the Jewish Journal page, thanking all participants for having this dialogue. I feel bad because I misspelled Rabbi Wolpe’s name. Sorry, Rabbi!

Before the program started, I was interviewed by a Jewish TV Channel, which unfortunately, I didn’t get the name of or the possible air date. If anyone out there can reply with that info, that would be greatly appreciated.

4 responses to “Speaking up for the Baha’is at Sinai Temple, Los Angeles”