NY Times Article: Iran, the Jews and Germany (& the Baha’is) 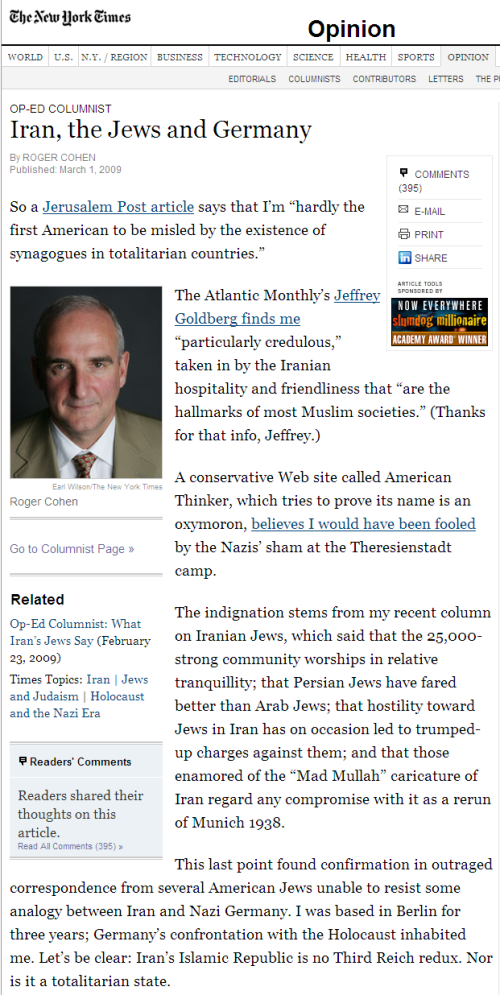 Dear Friends,
Roger Cohen, one of the most influential columnists at the NY Times, has been writing about Iran in over 7 op-ed pieces lately.
One of his latest articles, “What Iran’s Jews Say,” describes the relative civility of the government towards the Jews, as an effort to lessen the demonization of the Iranian government as portrayed by Western media.  Although the intention is worthy–we all should be striving for unity and consultation among nations–he is seemingly unaware of how bad things are for the Baha’is in Iran.  He mentions the Baha’is in passing, but doesn’t seeminglly equate ill treatment of the Baha’is as the same as of the Jews or other groups.
Please recommend this comment in response to Mr. Cohen’s recent article, “Iran, the Jews, and Germany” by registering at the NYtimes.com and clicking on “Recommend”:
http://community.nytimes.com/article/comments/2009/03/02/opinion/02cohen.html?permid=142#comment142
Text of Comment:
“Roger, tucked away in your earlier op-ed, “What Iran’s Jews Say”, is the single sentence: “Among minorities, the Baha’i — seven of whom were arrested recently on charges of spying for Israel — have suffered brutally harsh treatment.” Throughout your series of seven op-eds from Tehran, you failed to tell us anything more about the persecution of the Baha’i in Iran, or, whether you asked to meet with these seven persons.

“More than 9 months have passed since 7 leaders of the Baha’i community in Iran were arrested and sent to prison with no access to legal counsel. Now the Iranian government has announced the 7 have been charged with espionage. The move is the latest in decades of repressive measures against the Baha’is, the largest non-Islamic religious minority group in Iran. Those measures include barring Baha’is from attending public universities or working in public agencies, destroying or closing Baha’i places of worship, bulldozing Baha’i cemeteries, legally confiscating Baha’i property, and killing Baha’is with impunity.”

In your current op-ed, you write: “I was based in Berlin for three years; Germany’s confrontation with the Holocaust inhabited me.” Roger, doesn’t the above remind you of something that occurred in Nazi Germany some 70 years ago?

For your information, tens of thousands of Baha’is have been slaughtered in Iran from the time this religion emerged in the mid-nineteenth century. The most recent murder occurred in July 1998, when Rúhullah Rawhani, a Baha’i businessman and father of four, was executed in Mashad without sentencing and without any semblance of due process.

In “What Iran’s Jews Say”, you stated: “Iranian civility toward Jews tells us more about Iran — its sophistication and culture — than all the inflammatory rhetoric.” I suggest you examine Iranian “civility” toward its gentle Baha’i minority before pronouncing judgment whether Iran is a totalitarian regime. More to the point, go back and try writing an op-ed “What Iran’s Baha’is Say”. I am confident “the consistent warmth” (your description) with which you were received in Iran by this savage theocracy will dissipate with the speed of a uranium enriching centrifuge.”

2 responses to “NY Times Article: Iran, the Jews and Germany (& the Baha’is)”